The Spanning-Tree Protocol (STP) is used in redundantly connected Layer 2 networks to prevent loops by placing interfaces or ports in either a blocking or a forwarding state. Because STP is a core component and requirement of the CCNA certification, this section will not be covered in detail. Instead, this section will focus on security features that can be enabled to secure switched networks that are running the Spanning-Tree Protocol.

STP attacks typically center on changing the root bridge of the Layer 2 network by injecting falsified Bridge Protocol Data Units information, which causes Spanning-Tree Protocol recalculations and effectively allows the attacker’s switch to become the root bridge of the Layer 2 network. When this happens, traffic is transmitted across the attacker’s switch, allowing him or her to view any and all data by using simple tools such as packet captures.

The BPDU Guard feature is designed to keep the STP active topology predictable and to enhance network reliability by enforcing the STP domain borders. This feature either can be enabled globally (i.e. for the entire switch) or on a per-interface basis. In a valid switch configuration, ports configured for PortFast, which is used immediately to transition an interface on the switch to the forwarding state and is implemented on access ports, do not receive BPDUs.

Receiving a BPDU on an interface enabled for PortFast indicates an invalid configuration or possible security condition, i.e. the connection of an unauthorized device. The BPDU Guard feature places all ports with PortFast enabled that receive a BPDU into an error-disabled state. Once the interface has been placed into an error-disabled state, it must be enabled manually by the administrator, providing an additional layer of security, as well as a secure response to invalid configurations or possible security conditions.

Once enabled, BPDU Guard can be validated by issuing the show spanning-tree summary. The information printed by this command is illustrated in the following output:

To verify BPDU Guard on a per-interface basis, the show spanning-tree interface [name] detail command can be used, as illustrated in the following output:

Root Guard is a Cisco Catalyst switch feature that allows administrators to identify the correct placement of the root switch in a Layer 2 network. The Root Guard feature is configured on any and all interfaces that are non-root ports. A root port, in a Spanning-Tree Protocol implementation, is any port on the switch that is closest to the root bridge of the Spanning-Tree-switched domain. The following diagram illustrates how the Root Guard feature would be implemented to prevent non-root ports from becoming root switches: 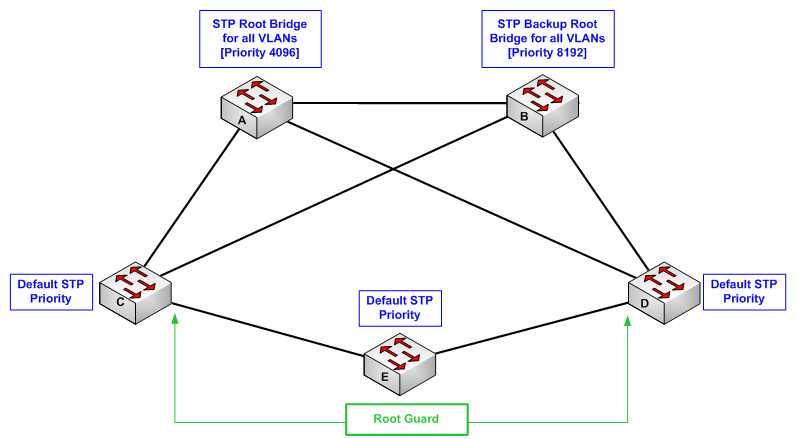 In this topology, there is no reason that Switch E should ever become the root bridge of the STP network. Therefore, the Root Guard feature can be enabled on the Switch C and Switch D interfaces that are connected to Switch E. This sets those interfaces as designated ports and if any device through those ports becomes the root bridge, perhaps through an incorrect configuration that results in superior BPDUs or via an STP attack, the interface will be placed into a root-inconsistent state. While the port is in this state, all traffic will be blocked by the switch. Additionally, the port will remain in this state until the superior BPDUs received on those ports are no longer being received.

Once configured, administrators can use the show spanning-tree interface [name] detail command to view Root Guard status on a per-interface basis, as follows:

Finally, the show spanning-tree inconsistentports command can be used to view inconsistent Spanning-Tree Protocol ports, as illustrated in the following output:

Learn more by studying for the Cisco CCNP Enterprise exam. 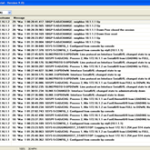 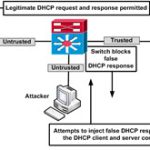 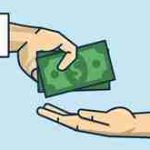 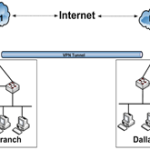