IPv6 addressing is a mechanism that was created to overcome the limitations of the current IPv4 standard. One of the major shortcomings of IPv4 is that it uses a 32-bit address space. Because of the classful system and the growth of the Internet, the 32-bit address space has proven to be insufficient. The key factors that led to the evolution of IPv6 were large institutions, Enterprise Networks, and ISPs that demanded a larger pool of IP addresses for different applications and services.

This mini-course should cover enough for you to pass the relevant sections of the Cisco CCNA and CompTIA Network+ exams.

IPv4 uses a 32-bit address space, so it offers around 4.2 billion possible addresses, including the multicast, experimental, and private ones. The IPv6 address space is 128 bits, so it offers around 3.4×1038 possible addressable nodes. The address space is so large that there are about 5×1028 addresses per person in the world. IPv6 also gives every user multiple global addresses that can be used for a wide variety of devices (e.g., PDAs, cell phones, and IP-enabled devices). IPv6 addresses will last a very long time. An IPv6 packet contains the following fields, as depicted in the figure below: 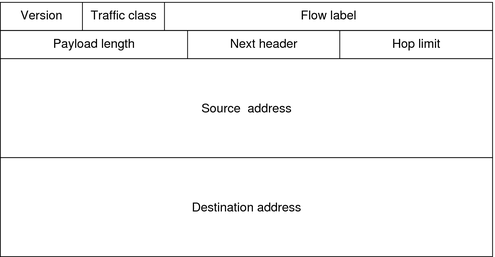 Knowing what is in the IPv4 header is important from a network designer standpoint because many of the fields in the header are used for features such as QoS or protocol type. The IPv6 header offers additional functionality, even though some fields from the IPv4 header have been eliminated, such as the Fragment Offset field and the Flags field.

The Version field, as in the IPv4 header, offers information about the IP protocol version. The Traffic Class field is used to tag the packet with the class of traffic it uses in its DiffServ mechanisms. IPv6 also adds a Flow Label field, which can be used for QoS mechanisms, by tagging a flow. This can be used for multilayer switching techniques and will offer faster packet switching on the network devices. The Payload Length field is the same as the Total Length field in IPv4.

The Next Header is an important IPv6 field. The value of this field determines the type of information that follows the basic IPv6 header. It can be a Transport Layer packet like TCP or UDP or it can designate an extension header. The Next Header field is the equivalent of the Protocol field in IPv4. The next field is Hop Limit, which designates the maximum number of hops an IP packet can traverse. Each hop/router decrements this field by one, so this is similar to the TTL field in IPv4. There is no Checksum field in the IPv6 header, so the router can decrement the Hop Limit field without recalculating the checksum. Finally, there is the 128-bit source address and the 128-bit destination address.

Considering the complex format of IPv6 addresses, some rules were developed to shorten them, these rules are referred to as IPv6 compression:

Considering the IPv6 example above, here are its IPv6 compression (shortened) representations:

Note: The double colon (::) notation can appear only one time in an IPv6 address.

In a mixed IPv4 and IPv6 environment, the IPv4 address can be embedded in the IPv6 address, specifically in the last 32 bits.

Another important multicast address is the solicited node multicast address, which is created automatically and placed on the interface. This is used by the IPv6 Neighbor Discovery process to improve upon IPv4 ARP. A special IPv6 address is 0:0:0:0:0:0:0:1, which is the IPv6 loopback address, equivalent to the 127.0.0.1 IPv4 loopback address. This can also be represented as ::1/128.

IPv6 global unicast addressing allows aggregation upward to the ISP. A single interface may be assigned multiple addresses of any type (i.e., unicast, anycast, and multicast). However, every IPv6-enabled interface must have a loopback address and a link-local address.

As with IPv4, there are different mechanisms available for IPv6 and the most important of these includes the following:

IPv6 uses a Neighbor Discovery protocol (RFC 2461), unlike IPv4, which uses the Address Resolution Protocol (ARP). IPv6 hosts use ND to implement “plug and play” functionality and to discover all other nodes on the same link. ND is also used in checking for duplicate addresses and finding the routers on a specific link. ND uses the ICMPv6 message structure in its operations and its type codes are 133 through 137:

Neighbor Discovery goes beyond the capabilities of ARP, as it performs many functions:

Many of the features mentioned above have IPv4 equivalencies but some of them are unique to IPv6 and provide additional functionalities.

One of the important features made possible by the ND process is DAD, as defined in RFC 4862. This is accomplished through Neighbor Solicitation messages that are exchanged before the interface is allowed to use a global unicast address on the link, and this can determine whether the particular address is unique. The Target Address field in these specific packets is set to the IPv6 address for which duplication is being detected and the source address is set to unspecified (::).

The IPv6 stateless Auto-Configuration feature avoids using DHCP to maintain a mapping for the address assignment. This is a very low-overhead manner in which to disseminate addresses and it accommodates low-overhead re-addressing. In this process, the router sends a Router Advertisement message to advertise the prefix and its ability to act as a default gateway. The host receives this information and uses the EUI-64 format to generate the host portion of the address. After the host generates the address, it starts the DAD process to ensure that the address is unique on the network.

IPv4 performs Name Resolution by using A records in the DNS. RFC 3596 offers a new DNS record type to support the transition to IPv6 Name Resolution, which is AAAA (Quad A). The Quad A record will return an IPv6 address based on a given domain name.

IPv6 does not allow packet fragmentation through the network (except for the source of the packet), so the MTU of every link in an IPv6 implementation must be 1280 bytes or greater. The ICMPv6 Packet Too Big error message determines the path MTU because nodes along the path will send this message to the sending hosts if the packet is larger than the outgoing interface MTU.

DHCPv6 is an updated version of DHCP that offers dynamic address assignment for version 6 hosts. DHCPv6 is described in RD 3315 and provides the same functionality as DHCP but it offers more control, as it supports renumbering without numbers.

The support for IPsec in IPv6 is mandatory, unlike with IPv4. By making it mandatory in all the IPv6 nodes, secure communication can be created with any node in the network. An example of mandatory and leveraged IPsec in IPv6 is OSPF, which carries out its authentication using only IPsec. Another example of the IPsec IPv6 mechanism is the IPsec Site-to-Site Virtual Tunnel Interface, which allows easy creation of virtual tunnels between two IPv6 routers to very quickly form a site-to-site secured Virtual Private Network (VPN).

The following new routing protocols were developed for IPv6:

Transitioning from IPv4 to IPv6

Because IPv6 almost always comes as an upgrade to the existing IPv4 infrastructure, IPv6 design and implementation considerations must include different transition mechanisms between these two protocol suites. The IPv4 to IPv6 transition can be very challenging, and during the transition period it is very likely that both protocols will coexist on the network.

The designers of the IPv6 protocol suite have suggested that IPv4 will not go away anytime soon, and it will strongly coexist with IPv6 in combined addressing schemes. The key to all IPv4 to IPv6 transition mechanisms is dual-stack functionality, which allows a device to operate both in IPv4 mode and in IPv6 mode.

One of the most important IPv4 to IPv6 transition mechanisms involves tunneling between dual-stack devices and this can be implemented in different flavors: 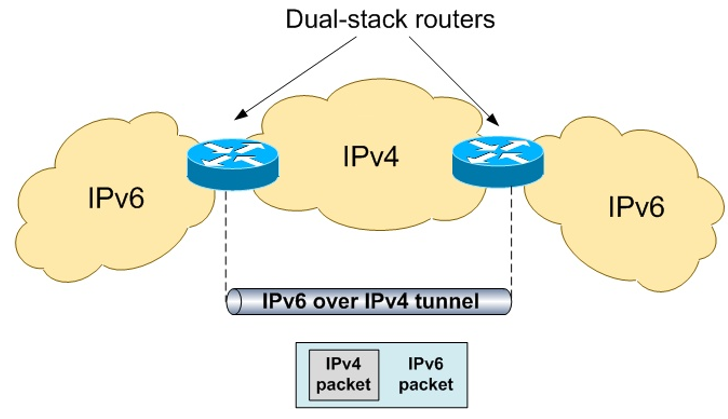 Analyzing the figure above, the IPv4 island contains two dual-stack routers that run both the IPv4 and the IPv6 protocol stacks. These two routers will be able to support the transition mechanisms by tunneling IPv6 inside IPv4, and the two routers each connect to an IPv6 island. To carry IPv6 traffic between the two edge islands, a tunnel is created between the two routers that encapsulate IPv6 packets inside IPv4 packets. These packets are sent through the IPv4 cloud as regular IPv4 packets and they get de-encapsulated when they reach the other end. An IPv6 packet generated in the left-side network reaches a destination in the right-side network, so it is very easy to tunnel IPv6 inside IPv4 because of the dual-stack routers at the edge of the IPv4 infrastructure. Static tunneling methods are generally used when dealing with point-to-point links, while dynamic tunneling methods work best when using point-to-multipoint connections.

Network Address Translation Protocol Translation (NAT-PT) is another technology that can be utilized to carry out the transition to an IPv6 network. NAT-PT is often confused with NAT but it is a completely different technology. Simple NAT can also be used in IPv6 but this is very rare because IPv6 offers a very large address space and private addresses are not necessary. NAT-PT is another translation mechanism that will dynamically convert IPv4 addresses to IPv6 addresses, and vice-versa.

Another static tunneling technology is IPv6IP, which encapsulates IPv4 packets directly into IPv6. This is also called manual tunneling. Another type of static tunnel that can be created is a GRE tunnel that encapsulates the IPv6 packets within a GRE packet. GRE tunneling might be necessary when using special applications and services, like the IS-IS routing protocol for IPv6.

The dynamic tunnel types include the 6to4 tunnel, which is appropriate when a group of destinations needs to be connected dynamically utilizing IPv6. ISATAP is a unique type of host-to-router dynamic tunnel, unlike the previously mentioned tunneling techniques, which are router-to-router. ISATAP allows hosts to dynamically get to their IPv6 default gateway.

Note: ISATAP is a protocol that will soon fade away because almost all modern hosts and routers have native IPv6 support.

A network designer should have a very clear picture of the advantages IPv6 has over IPv4. The enhancements of IPv6 can be summarized as follows: 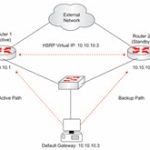 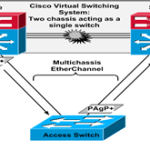 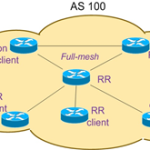 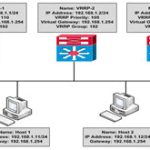